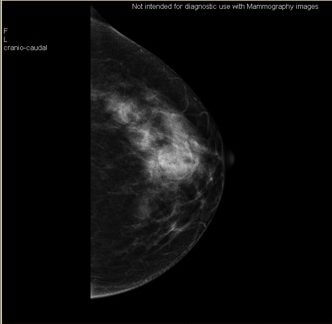 What is the difference between a mammogram and a breast ultrasound scan?

Those attending a breast clinic most likely will get some sort of investigation. These two diagnostic investigations are quite different to each other. A mammogram is good at looking at the breast as a whole picture and therefore is useful as a surveillance tool. An ultrasound scan on the other hand is used more as a targeted scan. If there is a palpable change or lump in the breast, then an ultrasound scan can be helpful to focus on that specific area.

What is a Mammogram?

A mammogram is essentially an Xray that takes a picture of the breast in its entirety. It uses small dose radiation which is safe. A mammogram detects cancers which are palpable but also those which we can’t feel. It can also identify areas that may look slightly abnormal, such as areas of microcalcification, that may need further investigating.

As a rule, images of both of your breasts are taken (bilateral mammogram). Sometimes the radiographer takes additional views of a breast to obtain a clearer picture of a specific area.
If you have had a simple mastectomy or mastectomy with reconstruction, the mammogram will only be performed on the other breast.

What does it involve and is a mammogram painful?

The procedure itself may take about 15 minutes to complete. You will be asked to remove your clothes from the waist up, including your bra. Each breast, in turn, will be pressed in between two metal plates for a few seconds to take the picture.
It may be slightly uncomfortable and you may feel a slight pressure on your breast. Some women may also find it painful. However, on the whole, it is not too uncomfortable and the majority of women tolerate the procedure really well. The radiographer will take two views of each breast.

What happens if there is an abnormality?

If we see an abnormality on a mammogram, then we will take a biopsy sample.
This is done either whilst you are having a mammogram or under ultrasound guidance. The biopsy results take roughly a week to 10 days to become available, and an appointment will be arranged for you to see the doctor in the clinic. 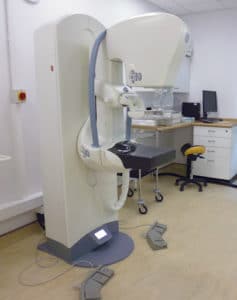 This is a mammogram showing an abnormality in the lower part of the breast.

Who can have a mammogram?

NICE (National Institute for Health and Care Excellence) guidelines state that mammograms are best suited to assess women aged 40 and over. This is because young women’s breasts are normally quite dense which makes a mammogram not a particularly useful tool for this age group.

What is a breast ultrasound scan (USS)

An ultrasound (sonography) uses high-frequency sound waves to generate an image. Unlike mammography, it does not use ionising radiation. A thin layer of gel is usually applied to the skin and a probe is then placed over the area of interest which will then send pulses of high-frequency sound waves into the tissue. As the sound waves bounce off the tissue, the receiver in the probe records the very small changes in the sound’s direction and pitch. These are converted into an image that can be seen on the monitor.
An USS of the breast is used as a target scan rather than a surveillance tool. 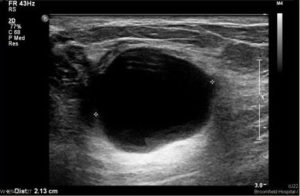 This is an ultrasound image of a breast cyst, the contents of which is dark on the scan.

What does it involve?

The procedure does not take very long, roughly 10 minutes. Once you have removed your clothes from the waist up, including your bra, you will be asked to lie down on an examining couch. The USS machine is portable and it is normally located next to you. The radiologist/sonographer will then scan the area of concern, having applied a small amount of gel on the probe. The image can be seen in real time which is displayed on a screen on the machine. You can also ask to view the image if you like. During the scanning process, you may be asked to change position a few times. Once it is complete, the gel can be wiped off the breast easily with some paper towel.

Is a breast ultrasound scan painful?

The procedure itself is not painful at all. If the area that is being examined is painful, then the pressure of the probe may be slightly uncomfortable, but on the whole, it is a painless procedure.

What happens if there is an abnormality?

If this is the case, then a biopsy will be performed. This is done after infiltrating local anaesthetic around the area of concern. The radiologist will guide you through the procedure step by step. Afterwards, the area will be covered with a dressing and normally it should be kept dry for 48hrs or so. Sometimes you may develop a bruise around the biopsy area that normally settles with time.

Who can have an ultrasound scan?

Anyone can have an USS, even when you are pregnant. In fact, USS are performed during pregnancy to determine gestation as well as to identify abnormalities. Women who are younger than 40 years may only get an USS rather than having a mammogram, due to the increased density of breast tissue in younger women.

Neither of these investigations is painful and women tolerate them really well. So, please do not feel scared or anxious if your doctor has arranged one of these for you. The type of investigation you have depends not only on your age but also on your symptoms.

A lot of us know that we need to get fitter. This could be for a number of reasons; wanting to to lose weight, to

What is a mastectomy?

A mastectomy is the surgical removal of the entire breast. It derives from the Greek word mastos meaning “breast” and ektomia meaning “a cutting of”.