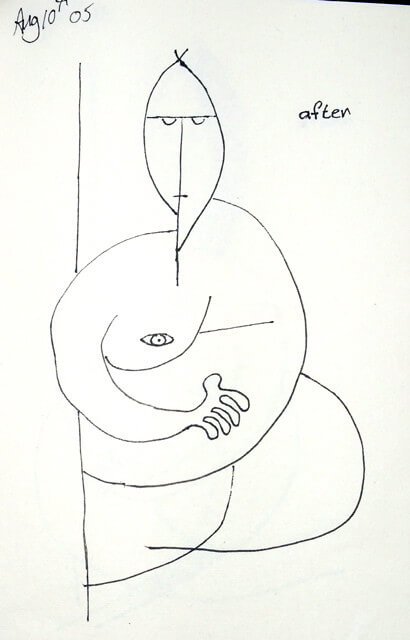 What is a mastectomy?

A mastectomy is the surgical removal of the entire breast. It derives from the Greek word mastos meaning “breast” and ektomia meaning “a cutting of”.

Why have I been recommended to have a mastectomy?

There are different reasons why a mastectomy is recommended as a treatment option. It is usually determined by the tumour size, tumour characteristics and size of the breast.

Are there different types of mastectomies?

There are 4 different types we normally perform:

Here we remove the breast by placing an incision that curves from one side of the breast to the other side, above and below the nipple-areola complex (NAC) area, which is the pigmented area surrounding the nipple. The breast is dissected off the skin above and pectoralis major muscle below and removed, together with the nipple and the areola. You will have a flat chest wall as a result of the operation. The scar usually extends across the chest wall, in place of where the breast would have been.

A SSM is usually performed when a breast reconstruction is also being planned.
We make the incision by outlining the nipple areola complex. The breast together with the nipple areolar complex is then separated from the covering skin above and the pectoralis major muscle below and removed through the round opening created. You may be wondering how can the breast be removed from such a small hole? Skin is in fact very stretchy and surprisingly the breast almost always can be removed through it.
So, unlike a simple mastectomy where skin and the whole breast is removed, in a skin-sparing mastectomy, the enveloping skin of the breast is ‘spared’. This creates a skin pocket for the subsequent reconstruction. The resulted scar is shorter than a that of a simple mastectomy.

Similar to a skin-sparing mastectomy procedure, a nipple-sparing mastectomy (NSM) is performed in conjunction with a breast reconstruction procedure.
In this procedure, the nipple and the areola complex is ‘spared’ and left behind. The incision for this operation is usually placed somewhere on the periphery of the breast, either on the outer side or the lower part of the breast i.e. the inframammary fold (IMF). Again, the breast is separated from the skin and underlying pectorals major muscle and is removed from the opening created. You will be left with the breast skin including the nipple and the areola complex. A biopsy is normally taken from the underside of the nipple area to check for the cancer cells, during the operation. In some centres, the result of this biopsy can be available straight away and if cancer cells are present, the NAC will be removed. Sometimes however, the results may not be available immediately and any required surgery will take place on a different day.
The resulted skin envelope is then used to ‘cover’ the newly reconstructed breast.

This is performed on women who are considered high risk of developing breast cancer in their lifetime. Women who have the BRCA 1 or BRCA2 gene mutation may consider having this type of surgery. In a mastectomy, it is impossible to remove the entire breast tissue and about 5-10% of breast tissue is left behind. Thus a risk-reducing mastectomy does not confer 100% protection from developing breast cancer, it does, however, reduce the risk significantly. Any of the previously mentioned mastectomies can be performed as a risk-reducing mastectomy.

Ultimately this is a discussion you will have with your surgeon who can talk you through the options and advise you appropriately based on your diagnosis. The type of mastectomy you have is also determined by whether you choose to have a breast reconstruction.

What happens in a breast clinic?

If you have noticed changes in your breasts or have any breast symptoms, then your GP may refer you to a breast clinic. The thought

How has the Covid-19 pandemic impacted breast cancer services?

The covid-19 pandemic has changed the world beyond recognition. The way we live our lives has been impacted in ways that nobody could have imagined.